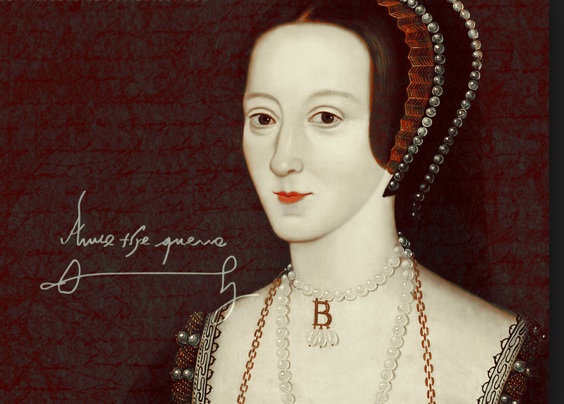 My feminist hero isn’t really a hero. At least not in casual popular estimation. Many would likely call her a villain; “adultress,” “slut,” and “bitch” are equally oft-used labels. Nor is she feminist, simply by virtue of having missed the first wave by more than 300 years. But she has, in time, come to stand as a figurehead of not only historical importance, but the more modern concept of feminine empowerment as well.

I couldn’t really pinpoint the origins of my obsession with Anne Boleyn. I’d like to say it began before everyone else’s did; in reality, I think I got swept up in the same “Other Boleyn Girl”/ “Tudors” wave that captivated the general, lusty-thriller hungry public. (I know it’s fashionable to hate both of those things, and snicker at their outrageous inaccuracies, but I still maintain that “The Other Boleyn Girl” is the Michael Jordan of trashy history fanfic, and Jonathan Rhys Meyers made an impressive, if inappropriately proportioned, Henry VIII.) Over the years, my fascination has taken on new and more intimate forms: on my last birthday, I tattooed Anne’s signature as queen on my right shoulder in her original handwriting, with “queen” quaintly spelled “quene” in pre-standardized English. While watching “Brave” for the first time, I even sighed wistfully throughout, because it reminded me too much of what Elizabeth I’s girlhood might have been like if things had worked out between her parents. (Though the whole turning into a bear thing probably would have been handy in warding off the swordsman.)

To be honest, I revere Anne so much that writing about her influence on me seems trickier than maneuvering the cliques of the English court. She’s Regina George – any effort by me to capture her queenliness in one meager essay is tantamount to making out with a hotdog. From the moment I picked up my first biography, to every second spent scrolling through archives upon archives of robust online resources like “The Anne Boleyn Files” and “On the Tudor Trail,” I’ve found myself fundamentally connecting with her spirit, her moxie, her message. She was a take-no-prisoners seductress – an outspoken scholar and deftly able diplomat, she wielded her formidable learning and dagger-quick wit like weapons of war. And indeed, they assisted her in conquering much territory, staking out personal and political claims virtually unheard of for a woman then and, let’s face it, really since.

If you’re perhaps not all that familiar with Anne’s story, allow me to present you with the Reader’s Digest version. As the daughter of a prominent, well-respected English ambassador, Anne grew up among a plethora of flashy courts and ravenous factions in the middle of Europe’s flourishing Renaissance. While serving as lady-in-waiting to Henry VIII’s first queen, Catherine of Aragon, she caught the king’s notoriously wandering eye, but managed to stave off his equally notorious wandering hands long enough to generate intrigue and obsession on the part of the son-less Tudor king. Catherine had long since dried up and only managed to produce a living daughter, so obviously had worn out her usefulness as a wife (we can probably surmise comfortably that this dismissal extended to the castle bedroom). Therefore, in Anne, the king saw not only the chance to toss his royal knickers in a tangled ball on the floor, but also the long sought-after opportunity to get a much-needed son and heir off a considerably younger wife.

Whether Anne actively encouraged the king’s advances through an elaborate scheme of salacious withholding or did her modest best to fend off a married horn-dog is up for debate. But ultimately, Henry manipulated Biblical and canonical law to dump Catherine and marry a pregnant Anne, who later gave birth to the future Elizabeth I. Oh, and along the way, England went rogue and severed itself from the yoke of Catholicism, while Henry pulled a Patriot Act and named himself the Supreme Head of the Church of England. Perhaps unsurprisingly, the king got a little mad with power, and over the course of three years enacted a slew of executions that included his martyred second wife. The once desperately desired Anne, for whom the king endured excommunication and built an entire religion, went down on trumped up charges of adultery, but mostly for failing to grow a tiny penis inside of her.

Today, Henry’s church is known as Anglicanism, and counts at least 70 million parishioners worldwide. One of them is my mother. Until the age of 17, one of them was me. While not exactly a lefty liberal faith, Anglicanism has produced the world’s first openly gay bishop and does allow women to be priests. These innovations have their roots in Anne’s nascent influence. An early champion for reformist Evangelical policy, Anne encouraged her ladies to read the Bible in English, and quibbled with the king’s chief minister Thomas Cromwell in favor of allocating the wealth confiscated from England’s monasteries to the poor. In an era that declared learning dangerous and barred the lesser classes from actually studying governing texts for themselves, Anne thumbed her nose at Papal authority and undertook her own version of smashing the patriarchy.

In recent years, she has been assigned Real House Wife-like qualities: shopworn, over-sexualized, over-exposed. (An odd problem for anyone centuries dead.) And of course, it’s tempting to disqualify her from the badge of feminism for the crime of husband-stealing. Not to say that Catherine of Aragon didn’t get the raw end of the misogynistic stick, but think of it this way: in late Medieval England, marriage was virtually the only way a woman could hope to advance her position. Anne didn’t so much betray Catherine as out-maneuver her: today, we might see the same sort of competitive rivalry staged in elections and job interviews. For however brief a span of human history, a member of the so-called weaker sex commanded real power, and reshaped the destiny of an entire world superpower. It’s the kind of résumé even the most accomplished of female leaders would rightfully envy.

While she died in disgrace, her legacy outreached that of her detractors, and today her name is becoming synonymous with the ideals of female strength and courage of character. For me, she inspires every day ambition: the will to preservere against even the most seemingly astronomical of odds. Although we wouldn’t have much common ground in matters of religion – though raised Anglican, I’ve long been a vocal atheist – we probably would have much to discuss in terms of reform and education.

If, on the 0.00001% chance that the afterlife is real, and I’m ever presented with the opportunity to share these thoughts and experiences with the real Anne, I hope that I would get to define feminism for her. And I’m sure she’d have much to teach me about what being a feminist hero really means.