The clear winner of red carpet looks for me? Claire Danes’ monochromatic stunner. It seems fairly simple in the front, but then she gives an over the shoulder look, and the dress goes from simple to stunning. 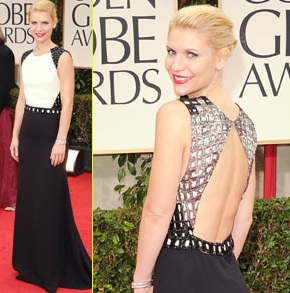 Octavia Spencer was fantastic and just so sassy in The Help. And she was lovely in lilac on the red carpet.

END_OF_DOCUMENT_TOKEN_TO_BE_REPLACED

I wonder if Claire Danes has spent most of her career trying not to be Angela Chase.

Because every time I’ve seen her since then, my heart skips a beat, and I think, Angela! But it’s not Angela, because her life and her show died suddenly and inconclusively. It’s just Claire Danes, the person who gave Angela Chase so much life.

Not that Claire Danes is disappointing in herself. And since MSCL (that’s My So Called Life for you non-believers) she’s gone to Yale, earned “critical acclaim” for some decent movies, played big and small roles in forgettable rom/coms, and done some Broadway. It’s just that she’s not Angela, and every time I see her, it reminds me that the show tanked for no good reason.

But not this time. Claire Danes is in a commercial for a prescription that promotes eyelash growth. When I saw it, I didn’t think of Angela Chase. I was just watching another commercial for an innocuous magical prescription that featured an innocuous blonde. The commercial wasn’t as batty or fantastical as most of them (no old couples winking in kitchens-turned-jungles here), and I was hardly paying attention until the very end, when a close up of the blonde’s face filled the screen and I squinted in horror: Is THAT Claire Danes?!

Which just makes the whole situation even more depressing. Because fine, I accept that Jamie Curtis will promote yogurt that makes you poo, and that Sally Field will make me giggle every time she says “Boniva,” but Claire Danes has had a ho-hum career, not fantastic and not terrible, and will probably always be remembered as Angela Chase.  I’m no agent, but it seems to me that promoting laxatives or pointless prescriptions or taking on other embarrassing acting jobs is usually only suggested for actors and actresses at the end of accomplished careers. Kind of like being a greeter at Wal-Mart: Something to do, and it can’t hurt anything.

Who knows? Maybe she just needed the cash. But I offer my sincere apologies to Claire, because being the standout star who brought Angela Chase to life seems to have given her Angela’s curse: she was easily, and perpetually, unnoticed.

At least she’ll always have that delightful Gap commercial.